Squirrel Away - Play with up to 4 players in this frantic Squirrel game! 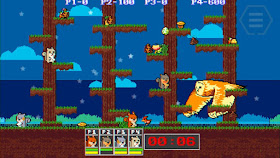 A game with Squirrel's you say, a game with up to four of them? Sign me up! Welcome to ' Squirrel Away ' developed by Alpaca Space Lab, a wickedly cool looking multplayer game for PC, MAC, Linux and Android, whereby you need to collect as much fruit as possible before your opponent. But watch out for those dangerous predators or you'll end up as tasty meat!

Squirrel Away is a name your own price game, so you can spend as little or as much as you want to support the developer. If you just want to play it as a trial, you could download it for free and then pay later if you like the game!