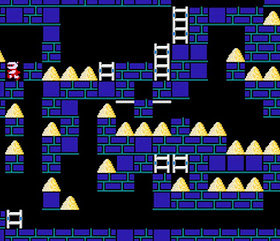 Only just today we mentioned the C64 game ' Professional Lode Runner ', which was modified by DARTS in 1987 and released as a clean up version this week by Reengine & Mod. Well this is the NES version of the original Lode Runner first released in the early 1980's, but has now been given a overhaul hack and also been made far more difficult; named as ' Lode Runner Blue '. In fact, 41 of the 50 levels were completely changed, 9 levels have been made much harder, SIX enemies on screen, and palette changes throughout the game. To show you the difference we've provided two videos, one from the original, and another from the blue edition.

As you can see visually there is a remarkable difference, with bright coloured gold, intense red enemies, main sprite design change and blue walled palettes throughout. Purists will probably not like this version by Strobenz, but if you compare it to the hole digging, enemy trapping and gold collecting Macintosh release I played, you'll get no complaints from me!