Alien 8 - Ultimate Play the Game Classic is coming to the C64! 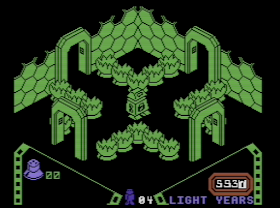 Possibly the last post of the day unless something major comes out, but we have recently been contacted by Artur Bujdoso of a new C64 port that he is currently working on at this very moment. This port is none other than Alien-8, which was originally developed by the legends that is Ultimate Play the Game for the ZX Spectrum, BBC Micro, Amstrad CPC and MSX. To coincide with this news, the person behind the port has released a very early teaser footage, which is based on the BBC Micro version but as of yet has no sounds!


Other additions are yet to be implemented but will happen for the final release, is a title screen, game over screen, a loading screen, background music and possibly better sound effects. But as of yet we don't have a release date but if you remember games such as Knight Lore by Chris Stamper and original graphics design by Tim Stamper, you will probably be looking forward to playing this on your C64!