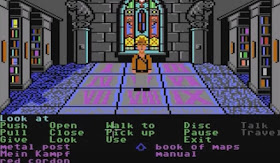 Last year we gave you the special heads up news of the C64 work in progress adventure port of the classic game "Indiana Jones and the Last Crusade ", which appeared on the Amiga, PC, Atari ST and Mac. Well fast forward to today and we've just been told by Retro Nerd, that Brick Bami has finally released a new in development tease that shows a number of improvements over from the previous video. As we said before this latest port was never originally released on the C64 and as such the developer hopes to push the game to a feature packed title and one that most C64 owners would be proud to have in their collection.


Already we can see that this in development C64 version of Indiana Jones and the Last Crusade is looking mighty impressive, from the animation and graphics to the general feeling of the game which really sticks as close as possible to its Indy roots. As for what is different in this version, there are tons of improvements according to the engine in comparison to Part 2, e.g.:

So keep an eye on this one, I think this is going to be a big hit with the C64 crowd when it finally sees the light of day!