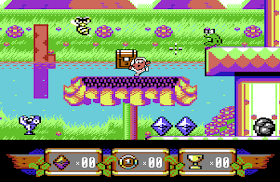 Whenever someone says to me "what do you think of the upcoming game ' Sam's Journey ' by Knights of Bytes for the C64", I just have to say these words; " IT LOOKS AWESOME ". Yes indeed, every teased trailer so far has whet not only my appetite but many that have viewed the upcoming game, as it is going to feature incredible graphics, smooth scrolling, multiple worlds, 27 huge levels, character abilities and much much more. In fact it is one of those abilities which is now being featured in a final teaser trailer ' Sam's Perfect Pitch ', where we can see our hero discover another costume that gives him a white cap and a strong throwing arm!


As you can see from the above video this game could be the best ever platformer on the C64, as even the developer's themselves are taking on the challenge. But even though the game is due for release at some point soon, it may be worth your time helping the developer Chester Kollschen and team under the label Knights of Bytes as he also looking for your financial support via his Patreon page!