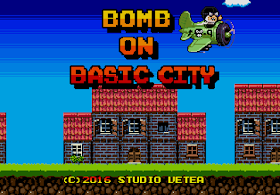 Another heads up by Retrotaku, but this time not only available as an updated download, but also available to play in your browser on your PC, is Studio Vetea's ' Bomb on Basic City', which is a side scrolling action arcade game for the Sega Genesis. In this game you control the pilot Papi Commando and at his disposal is a rather powerful bomb, that if dropped causes both devastation to buildings and anyone unlucky enough to be shooting at you from below. The main of the game, to wipe out all the buildings and enemy units, just be careful you don't get too close, or you will crash! 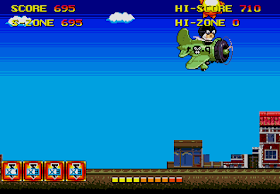 When I first played this game I wasn't sure exactly what to do, mainly for the fact the keys are slightly different online compared to a gaming pad and I usually just jump straight in without reading the instructions. However when I worked out that the Z key dropped bombs and the different power ups affected the way you play the game, I had a blast.


As your flying commando appears on the left and scrolls to the right, you have to drop your bombs on the buildings and soldiers to gain a high score, with each hit causing a combo. If you end up collecting the power ups such as up and down, you are also able to move your plane up and down to gain an extra advantage. Which is not possible without. In all this is a lovely little game, that is highly enjoyable to play, more so with the added soundtrack that never gets old!