In 2014 Richard Bayliss and Wayne Womersley announced their work in progress Arcade style C64 game of ' Honey Bee ' for the RGCD C64 16KB Cartridge Competition. The story of the game revolved around a rather happy looking Buzzy Bee that had to collect enough pollen to bring it back to the hive, because the Queen was rather angry at such a low honey production, no thanks to her other lazy workers. Well that same game, with the same story but much improved, has been made available through Psytronik Software for pre-order, and thanks to a good friend of ours has been given to us for an exclusive preview 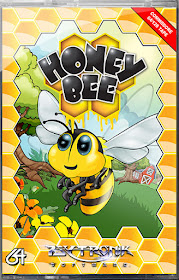 The first thing to notice about the game is a rather lovely soundtrack during the tape loading screen by none other than Richard Bayliss, who is no stranger to making SID tunes for other such games we've mentioned before. If you ever see this name mentioned with a C64 game, you just know the tune is going to be something special, more so with a lovely designed tape screen such as the one provided in Honey Bee.

Now that is out the way, it's on to the main game. As you can see in the screen shot above, the aim of the game is to control your bee, avoid all the obstacles, gather the pollen from the flowers and bring it back to the hive by dropping the nectar from above. Once that is done, the level is complete and it's on to the bonus screen and then to the next level, of which there are 16 that change in design, enemies and flower placement.

Now here comes my issue with Honey Bee, yes it has some really nicely designed levels, lots of interesting enemies, lovely animations, challenging scenarios, a smooth control scheme and again a great soundtrack. But the same issue has cropped up that I had with the original RGCD 16KB compo version. That is the hit detection between your bee and some of the obstacles.

For example, when I first started to collect the pollen from one of the flowers, I kept on dying again and again, and I started to wonder if there was a bug in the game, because the aim of the game was to collect the pollen and bring it back to your hive. It turned out however, it was because my bum was only slightly touching one of the petals, which ended up in instant death and having to restart it all again. Don't get me wrong, I like a challenge, but I'd prefer it if the collective objective is also not part of your own doom.

Many other parts of the game can also kill you, which can end up a little bit frustrating, especially if you've got one flower left, only to die and have to do all the collections again. But if you can put aside that annoyance, the game is still enjoyable enough to play.

As for the last part of Honey Bee, it is the bonus levels and that involves you buzzing your way through what looks to be a cave, collecting objects and avoiding everything flying towards you. A nice addition indeed, if only the background wasn't so heavy on the eyes.

So what do I think of it overall? It is a nice game to play with lots of interesting designs across each of the 16 levels, with inclusive music by Richard Bayliss. Sadly that hit detection is still a huge turn off and I'd rather they make the entire flower safe to go near and touch, rather than the way it is now.

If you wish to pre-order the game for Disk or Tape, you can do so via the main site - Release Date : May 2016