Pentagram v.1.20 - Knightlore sequel ported to the C64 with a cool update! 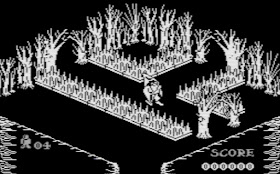 In April of this year @hayes_maker did a great write up, mentioning Rod & Emu's C64 port of the ZX Spectrum classic ' Pentagram ', which originally was released by 'Ulimate Play the Game' in 1986.  It was the fourth in the Sabreman series, following on from his adventures in Sabre Wulf, Underwurlde and Knight Lore and was played in an isometric viewpoint. Well after a number of write ups the game has now received a v1.20 update with improvements such as SID music by Saul Cross! 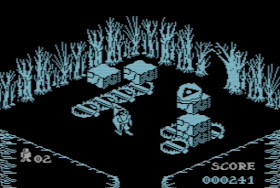 But wait there's more as this is no small update unlike the previous one. It also has atmospheric background sounds by Saul such as thunder, wind, animal sounds. Frame Sync and updated Frame Skipping taken from the Atari final release version for Turbo Chameleon 64 compatibility. (Run on Turbo Chameleon 64 at 3mhz or greater to play game frame synced at 50/60hz with no slowdown!), much cleaner and slightly faster screen routines, small C64 specific routines and an additional CRT download for cart fans!

- Do note however, the game is very slow on a standard C64 almost unplayable when I played it via WinVICE, so a Turbo Chameleon 64 is recommended at this time.