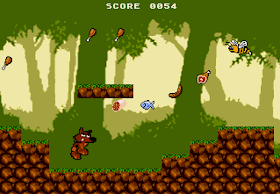 Many of you asked about the first place winner of the RetroKomp Game Dev Compo 2016, and here it is for the Sega Megadrive, ' VilQ ', by Axi0maT (code, GFX), KaiN (code) and AceMan (MSX). Unlike the other games mentioned in the game compo, this one is a non stop side scrolling jump, run and slider in which you need to avoid the enemies, pick up the food and get as far along as possible to reach an ever higher score.


I usually don't go against the competition winner results but I'll have to disagree with the choice here, I personally think Bridge Strike is the better game. VilQ doesn't have the high grade graphical quality of the Amiga entry with generally bland levels AND it's extremely repetitive to that of a Flappy Bird style game. But then that is just my personal opinion, but do you agree? Let us know in the comments below.