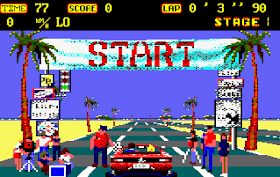 In 1986 Sega released one of the coolest racers of our time, it was none other than Out Run. An Arcade racer designed by Yu Suzuki, that was not only a commercial success but became one of the best selling games of its time with great graphics, fantastic music and fast paced track racing. It was just a shame however, the Amstrad CPC port was terrible with poor frame rates, colours and sound effects. So it was no wonder, a creator by the name of barbarian.1987 set out to fix all these problems while making the game incredibly smooth since 2012 as a PC port called ' OutRun CPC '.


Sadly because of what the game requires from an original Amstrad CPC with high specifications, and how smooth it runs it will only be a what if, but playable via the PC. So don't expect OutRun CPC to be released on an Amstrad CPC 464 or 6128 any time soon, not unless Batman Group gets a hold of it and does some sort of amazing wizardry. But still, at least you can play it as a beta today, with new fonts, endings and a new map with animated mini-car!