Tales of Popolon - Santiago Ontanon's new MSX game is a bit of a crawler! 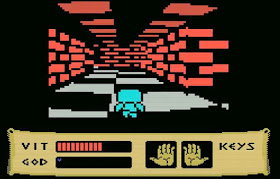 Once again another Nenefranz's heads up and again for the MSX, is Santiago Ontanon's ' Tales of Popolon ', which looks to be a 3D styled Dungeon Crawler that is in development and available as a ROM download with inclusive source code. In this game you play as the hero Popolon who is on a quest to stop to the source of evil that has not only taken residence in a fortress, but is killing people and has taken all the souls, stopping them from reaching Hades.


It isn't often we see games of this type mentioned as homebrews for the MSX, but Tales of Popolon looks to be a dungeon crawler type game, where you must move through tight corridors battling enemies with either fist or sword, as well as flipping switches and finding keys to move on to the next area. Currently the game is still in development, but the developer has made the current version available for download.

Video shows the intro and first map of  "Tales of Popolon" game for MSX. Hardware requirements: MSX1 with 16KB of RAM.