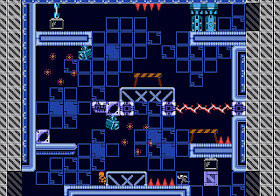 We've recently been contacted through our inbox about a new fast paced platformer that isn't just available on the Megadrive, but also the Gameboy, Dreamcast and for the PC via Steam. Titled as ' Escape 2042 ', and developed by Orionsoft. This game is set in a sci-fi futuristic time in which you play as Shun, a computer engineer and member of the Truth Defenders coalition that has been imprisoned in a high security prison to stop you from informing the people against the socialist government and the progressive dictatorship.


As the developer notes on their Steam page, the game takes place in three different environments (prison, desert, forest) and is interspersed with 2 mini-games, including a reversed “Shoot’em Up” and an original rappelling game. You must carefully make your escape by avoiding the security cameras, hacking the computers to open doors and deactivate defensive systems, and finally destroy your enemies for good with a quick throw of a well placed grenade.