Nemesis - An enhanced Gradius blasts its way onto the MSX2 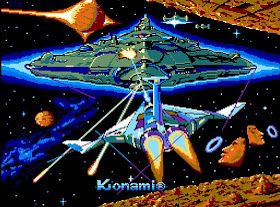 You may have played this sidescrolling shoot-em-up under the game's alternative title: "Gradius". It was a fairly faithful conversion of the Japanese coinop that was first released in 1986 and ported over to a number of systems such as the MSX. The game is classed as a side scrolling shoot em up, and puts you in control of the spaceship Vic Viper on a mission to destroy waves of enemies with a power-up system at your disposal. That same game has appeared in our news feed, but this time as an enhanced version available for the MSX2, that is also playable through your browser.


Some of you may ask why the need for an enhanced version as the original wasn't too bad, however this enhanced version goes above and beyond the original game with not just arcade style graphics based on the patched version by SHALOM. But it also features a turbo FIX routine by FRS, new graphics and colours by Toni Galvez, a new voice set by WYZ, and full programming by Victor Martinez, with extra help options such as VDP frequencies, and an invincible mode. In fact we can say, if you have to play Nemesis(Gradius) you owe it to yourself to play this enhanced version, either on a real MSX2 or in your browser!