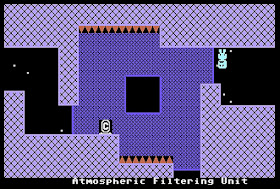 We are about to blow you away with possibly the BEST C64 release news of the week, as Laxity have released the full C64 conversion of the modern Indie game ' VVVVV ', which was originally released back in 2010 and created by Terry Cavanagh for multiple platforms including the PC. This puzzle platform game is a conversion of one of the hardest games you'll ever play but it's one of the best that has gathered countless high scores! 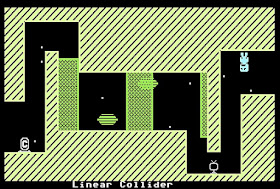 In this game you play as Captain Viridian, a pilot of a spaceship and leader of a crew that has crashed landed into a strange dimension. Your crew have been teleported away, and it's down to you to get through this world of strangeness and rescue them. Beware though, it may look like a minimalistic platformer, but the gravity will drive you insane as you swap from top to bottom avoiding some of the hardest platform puzzles known to man. A game that will put your skills to the test.

I wont spoil the game but this conversion by unctiover is just fantastic, it has all of the parts that made VVVVVV so fantastic including the challenging puzzles, but adds in one of the best soundtracks I've heard all year. In fact the music is so good, you'll spend half the time standing still in one spot just listening to it. But that's not all, in terms of the actual game itself, it's smooth, it's easy to control and you'll be coming back for more. Seriously play this guys, it's top stuff!