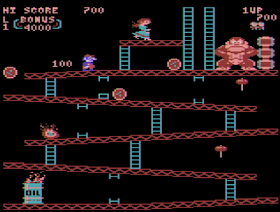 In 1981 Nintendo released one of the most famous games of all time, and that game was ' Donkey Kong '. A game in which you played as Mario that must avoid obstacles across a number of platforms, with sometimes a hammer in hand to save a damsel in distress from a giant ape called Donkey Kong. That same game which many of us still enjoy to this day, appearing as a port on a number of systems has finally appeared as an overhauled Atari 8-bit version by darryl1970, with a number of tweaks and enhancements. 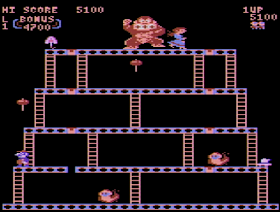 According to the developer, Donkey Kong was one of his childhood favourite games and loved the attention to detail in the Atari Computer port, but even so he felt the game could be so much better and more in line with the Arcades. As such using the advantage of modern day tools and teaming up with Playsoft, he has changed not just the sprite of Mario, but he has also tweaked most of the playfield objects (Kong, Pauline, Girders, Oil Can, Still Hammers, Fireballs, Pies, etc), improved animations and much more! So yes, if you want the best Atari 8-bit version, play this one!