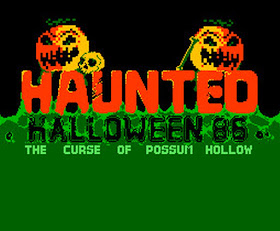 Halloween is fast approaching as more and more creepy games with pumpkins, ghouls and ghosts will start to appear on Indie Retro News for your horror enjoyment. One such game that has been on Steam since early march by the developers Retrotainment Games, is the rather nice beat em up platformer called HAUNTED: Halloween '86 (The Curse Of Possum Hollow); the sequel to the HAUNTED: Halloween '85 which was originally released on cartridge in October of 2016 for the original Nintendo Entertainment System


HAUNTED: Halloween '86 (The Curse Of Possum Hollow) is a lovely looking NES styled homebrew that has been upgraded in every way from the first title. It doesn't just feature the usual side-scrolling, platforming, beat 'em up action, but Tag Team Technology to swap between the two playable characters on the fly, an overhauled combat system with new moves, split-screen scrolling for parallaxing, animated backgrounds and interactive background objects, and new enemies that can even be decapitated!

So check it out and get ready for the spooky season!