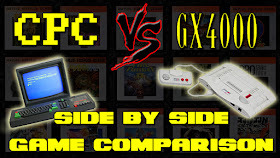 With the recent additions to the retroscene showcasing the Amstrad GX4000 console with the 'Eerie Forest' and 'CRTC3' demos, it's a perfect time to re-present my series of videos showing the often touted 'CPC shoveled' games and the differences between the versions. 15 of the 26 games released for the GX4000 on cartridge were ports of existing CPC tape or disk games. It's commonly thought these ports are identical to the CPC originals and therefore not worth the higher price tag and majorly contributed to the failure of the system.

This series of videos makes direct side by side comparisons as I discuss the differences, if any, between the versions and choose which one is superior. I believe this is the only source on the internet that demonstrates this.


If you are more interested in the Amstrad GX4000 and Plus machines, or retro games in general, check out the Plus Users Facebook page. https://www.facebook.com/groups/281939335598581/