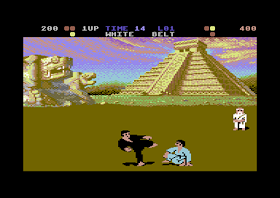 Following on from last week's preview, you can now play the full release of International Karate Ultimate.  A 30th anniversary homage to theArcher MacLean classic created by JonEgg, Excess and Formby cracking group inspired by a meet up at Syntax '17 demo party in Melbourne.   Here's a look at the features the final release includes.

2 Player Handicap Trainer: Select 0 for no handicap, or any number up to 5.  Selecting a number will give Player 1 a head start in the 2 player bouts, 5 being the hardest for Player 2, allowing Player 1 to win with 1 successful point in a bout.

Starting Belt: Give yourself more of a challenge in the 1 player game, by starting at a higher belt colour.

Suppress Mini Games: Prefer the fighting? Simply remove 1 or both of the mini games.

Player 1/2 Colour: Choose from 16 colours for each of the players, including pink, which makes you look like you're fighting with no clothes on.

There are also a number of keys you can enable to skip levels, quit game if you activated any of the endless modes, or activate the mini games or end a bout early or give yourself a point. 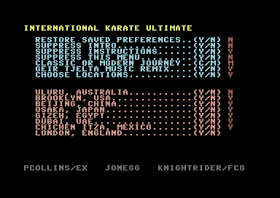 This menu will be displayed first in Ultimate.  It allows you to save any preferences, suppress these menus, suppress the docs.  And best of all, you can enable the awesome new music and choose which of the new backdrops you'll see in the game from a choice of all 8.  And as you can see in the screenshots, the new backdrops are absolutely stunning.  You can also play the original levels by selecting Classic Journey, giving you a total of 16 level backdrops included in this release. 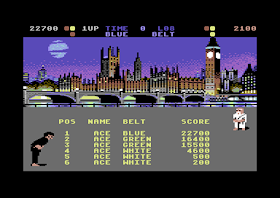 There are new docs added, containing controls, a typo and details of the easter eggs which I won't spoil here.  You'll want to skip the docs if you're in a hurry to play.  Overall, International Karate Ultimate is fantastic release, if you can flash an Easy Cart with the rom, you've got an instant loading version of one of the best C64 games ever made, with new features, graphics and music.  I played this so much, I finally managed to beat that green belt (without cheats!).  Bring on IK+ Ultimate!

Thrust 30 is out now Android, iOS and Web