RESHOOT R - An awesome looking Amiga game by Richard Löwenstein gets a release! 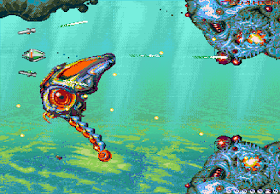 Another Amiga update this week as we were recently informed by Saberman, that Richard Löwenstein has now released his incredible looking side scrolling shoot em up of ' RESHOOT R '. This game coded in pure assembler language, is an awesome looking game that follows in the same style as the original game of RESHOOT, but instead is a far more intense experience with more colours, graphics, gameplay and thumping tunes.

A short gameplay tease! ( Don't want to spoil the game too much ;) )

RESHOOT R is a super reactive game for classic Amiga hardware, a horizontal scrolling shoot'em'up with lots of enemy objects and how to avoid them. The game features ardrenaline gameplay, high quality animation, a balanced difficulty curve, wicked graphics such as organic fog effects, jerk-free parallax scrolling and finally the experience of many objects, some small, some big, like you've never seen on the Amiga before.

* developed and programmed by industry veteran Richard Löwenstein
* plays to the performance capabilities of the Amiga CD32, 1200 and 4000
* five themed arenas in elaborately designed retro design
* Exciting attack waves and boss fights
* Extra weapons and power-ups
* multi-level scrolling, up to 100 objects on screen
* 50 Hertz refresh rate ensures constant high-speed
* more than 400 colours on screen
* thrilling soundtrack and SFX play simultaneously
* locally stored highscore list and additional Internet ranking option
* runs on standard hardware of the A1200, A4000 and CD32, no add-ons required
* tested on Amiga systems with 68020, 68030, 68040 and 68060 CPUs