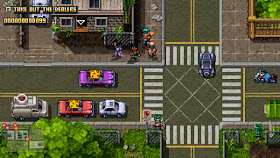 After all this time through many months of growing excitement, we are pleased to announce that Vblank Entertainment, the developer behind the action-adventure 8bit styled Grand Theft Auto parody with 80's and 90's pop culture ' Retro City Rampage ', has just announced that Shakedown Hawaii will be released today for Playstation 4, PSVita, Nintendo Switch and PC!


The anti-hero is back and he's out of retirement to once again cause complete chaos on the streets in glorious 16bit detail powered up with destructible environments and an arsenal of kick ass weaponry. Build a "legitimate" corporation by completing open world missions, acquiring businesses, sabotaging competitors, and "rezoning" land in an eagerly awaited game featuring not just amazing retro style graphics, but lots of kick ass action to keep you occupied for hours!