Vespertino - A Racing Simulator that will crown the Amstrad CPC as the best 8-bit platform? 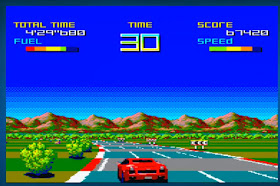 If you thought Super Mario Brothers on the C64 was going to be the only highlight this year, then prepare for a shock. As we've just been tweeted via @BATMAN_GROUP that they are working on a racing game called 'Vespertino'; a game they claim will crown the Amstrad CPC as the best 8-bit platform! Yes indeed from the same team who is working on the amazing Amiga to Amstrad CPC port of Pinball Dreams and through 28 years of productions for several productions, comes a new game that will apparently eclipse them all!


According to Batman Group who gave us the heads up. We now know Vespertino, which is being shown as real in game footage running on an Amstrad CPC above. Will feature 16-bit performance, a 3D CRTC-FX Engine, 25fps in game, Full Overscan, True Speed Feeling, have enhanced Video Modes,  include PRI technology, have UFD Sprites, the largest 8-bit OST, and finally will push the CPC beyond any limits thought possible working on all models!