Frostbite - Yet another Atari to C64 conversion from Chopper Command team is coming! 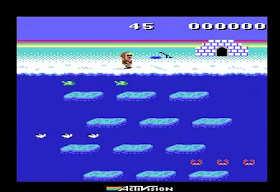 Glorious news if you have a C64 or an Emulator to hand, as we've just been told through Facebook that the same team behind the Atari to C64 conversion of Chopper Command and the previously released Keystone Kapers, has announced the next game in the trilogy line up as 'Frostbite'. Yes indeed, Antonio Savona, Steven Day, Saul Cross and Flemming Martins are back with another conversion, and unlike the previous game was originally designed by Steve Cartwright for the Atari 2600, and published by Activision in 1983!


Although I never had the chance to play this fine looking game even though I did have an Atari 2600. According to the wikipedia for Frostbite. The game combines elements of Frogger and Q*bert in an arctic setting. The object of Frostbite is to help Frostbite Bailey build igloos by jumping on floating blocks of ice, while trying to avoid deadly clams, snow geese, Alaskan king crabs, polar bears, and the rapidly dropping temperature.