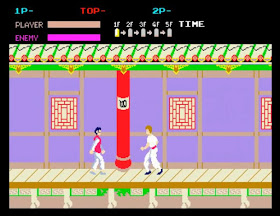 While many of you are still playing the excellent Arcade conversion of 'Rygar', there's another conversion you might be interested in playing, although not yet finished, and that's Kung Fu Master by Seko. Yes indeed this game which appeared in the 1980's in the Arcades that was later released on many different systems including the Atari 2600, Atari 7800, Amstrad CPC, Apple II, Commodore 64, NES/Famicom, MSX and even the ZX Spectrum, is now partly playable on an Amiga, as an early work in progress update.

Kung Fu Master is being written in Blitz Basic, as a game that was originally released in 1984 by Irem Arcade and has been covered on many 8 bit systems. Furthermore, not only is it considered by many as the first real beat em up all time history, this Amiga version does not only use the assets of the Arcade version but it will be an ongoing project due to be released at some point in the near future.