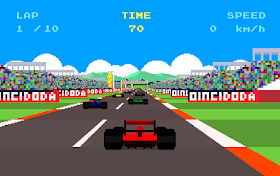 During the late 80's Namco released a brilliant arcade racing game called Pole Position; a game which was designed by Tōru Iwatani, designer of Pac-Man, and ending up as one of the most popular arcade racing games of 1982-3. It was such a good game, it was also released on multiple systems including the Atari 2600, Atari 5200, Atari 8-bit, Commodore 64/128, Commodore VIC-20, Intellivision, Vectrex, MS-DOS, TI-99/4A and Sinclair ZX Spectrum. Well if you remember this game, you'll be interested to know that Robbert Prins of Foppygames has released a very similar game for Windows which he calls 'Max Downforce'.

Max Downforce is an arcade racing game. You control your car with the arrow keys. The goal is to finish each of ten laps before the timer reaches zero. A portion of the seconds remaining upon completing a lap is carried over to the next lap. Tools used to create the game was Lua and LÖVE (Love2d), Notepad++, Paint dot net, SFXR and Audacity.