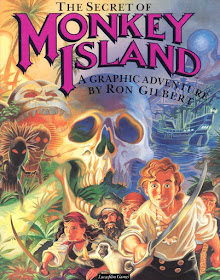 When discussing adventure games, one game will always come up, The Secret of Monkey Island. The Secret of Monkey Island or simply Monkey Island I was developed by Lucasfilm Games (later LucasArts) and released in 1990. Created by now industry legends Ron Gilbert, Tim Schafer, and Dave Grossman, it was created due to developers frustration with contemporary adventure games. Ron Gilbert conceived the idea in 1988, and he first wrote a couple of short stories about pirates 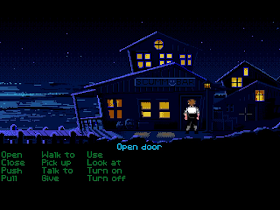 The idea was pitched to Lucasfilm as a series of short stories and while it was warmly received, Lucasfilm decided to postpone the idea and Gilbert was assigned to work on Indiana Jones and the Last Crusade (another Lucasfilm game). The development of The Last Crusade was finished in 1989, and Gilbert was allowed to work on The Secret of Monkey Island, and it was developed under the working title Mutiny on Monkey Island. The game’s atmosphere was inspired by the “Pirates of the Caribbean”, Gilbert favorite amusement park ride. According to Grossman, Gilbert always wanted to step off the ride, and “talk to the people who lived in that world”.

The game uses a SCUMM engine and it was the fifth game to use this engine. Gilbert was frustrated that the games that Sierra On-line, and as he later said: “you died any time you did anything wrong”. He decided to avoid the mistakes he made designing 1987 Maniac Mansion, mainly the dead-end situations and triggers for cutscenes. The developers ultimately decided that it would be impossible for the player character to die, except on one occasion (which is an Easter Egg).

The plot follows Guybrush Threepwood who wants to become a pirate. Guybrush seeks out pirate leader, who give him the three trials that he must complete to become a pirate (and drink grog with them). These tasks are sword fighting (by beating the swordmaster), treasure hunting (finding the buried treasure) and thievery (by stealing the valuable idol from the governor’s mansion). While completing the trials, Guybrush will hear rumors about the Ghost Pirate LeChuck, who died on mysterious Monkey Island expedition, an act meant to impress the governor Elaine Marley. Upon completing the trials, Guybrush learns that the governor Marley has been kidnapped by LeChuck, and he decides to buy a ship and gather a crew to go and save Governor Marley.

The game is divided into for parts: The Three Trials, The Journey, Under Monkey Island and Guybrush Kicks Butt. The gameplay uses the same gameplay system introduced in Maniac Mansion. You can use up to twelve verb commands in order to interact with the game world. This range from standard Open, Close, Use, etc. The puzzles are fairly simple, but there are a few of them are quite creative. You also cannot get stuck in the game, or reach a dead end, and as previously mentioned you cannot die. The Secret of Monkey Island was the first game to implement a dialog tree. You can choose several responses while talking to other characters, and to make things easier the first response are usually the correct ones (or those that progress the story). One of the most unique parts of the game is the sword fighting insult system. The designers were influenced by watching the Errol Flynn movies and other old pirate movies. In those movies, the opponents would taunt each other instead of outright attacking them. So, in the game, Guybrush must learn many insults and their comebacks. How this plays out is that the pirates will insult you and you must choose the appropriate comeback and vice versa. Also, there are several timed puzzles, but these aren’t difficult at all and are easy to figure out. The game has some small flaws, probably the biggest one being the safe combination, but there is a universal safe combination that is put in the game, just in case the game glitches out. 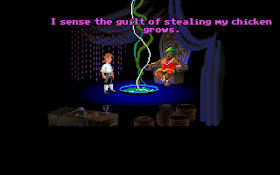 The Secret of Monkey Island was rendered in several modes and uses the upgraded SCUMM visuals. The original was released in EGA mode, with 320×200 pixel resolution in 16 colors, but according to the artist Steve Purcell, these created a major limitation for the art team and had a low number of so-called “ghastly” colors. The VGA version of the game fixed this issue, using a 256 color support, which allowed for more detailed graphics and backgrounds. This resulted in some of the best graphics for an MS-DOS and Amiga versions at the time of the release, and they still look amazing today. The music and sound effects in the game are superb. The soundtrack is a so-called “pirate reggae”, and it was the first project for the Lucasfilm composer Michael Land. Each track in the game is memorable, starting from the opening theme to various tracks in the game. The music is memorable and it remained memorable long after the release of the game and was even remixed several times.

The game was written by the trio: Gilbert, Schafer, Grossman and it is one of the funniest games ever written. Writer Orson Scott Card also provided advice while he was visiting the Skywalker Ranch. Early in the development, Gilbert noticed that the writings of Schafer and Grossman were too different, and struggled to create a good flow. To solve this problem Gilbert decided to assign them to different characters and parts of the story parts, depending on the type of comedy required. Surprisingly, this worked really well, taking into account that most of the game’s writing was done by Schafer and Grossman while they were programming the game, which means most of it was improvised. The result was many jokes and references, some of them even confused players. In the floppy version of the game, there was an infamous “stump joke”. At one point in the game, Guybrush would examine a tree stump and the game would ask you to insert disc 22, then 36 and finally 114 in order to continue. This resulted in numerous calls to the Luasfilms hint hotline asking about the missing discs. The “stump joke” was ultimately removed from later releases, but was still referenced in the sequel. 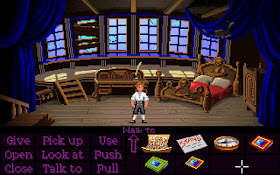 The Secret of Monkey Island, besides the original floppy release in 1990, also received a CD-ROM version in 1992. This version added several improvements, mainly the high-quality soundtrack and an icon-based inventory which replaced the text-based one from the original release. The game was ported to numerous platforms, mainly: Amiga, Atari ST, Mac OS. FM Towns, CDTV and Sega CD. In the future, the game would also be ported to modern systems, including OS X, PS3 and Xbox 360. 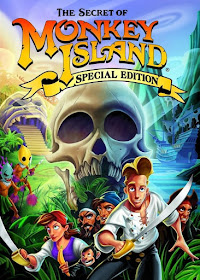 In 2009, the game received a remake with updated graphics and audio, named The Secret of Monkey Island: Special Edition. This version of the game was released for Windows, Xbox 360, PS3, macOS, iPad, and iPhone. The graphics are completely hand-drawn and now feature more detailed graphics and backgrounds, with a somewhat cartoony style. The game also features a remastered soundtrack, and voice acting. The voice acting was provided by the same cast that worked on other Monkey Island games. Other features introduced in the remake are a hint system and the option to switch visuals to the original game. You have the option to do this at any moment of the game, by pressing the game and the transition is smooth. The Special Edition would later be bundled up with the second game, which made it a definitive edition. The trio of designers also returned to provide the commentary which can be turned on at any moment in the game options. 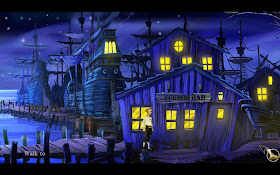 The Secret of Monkey Island was a huge success, and it helped the game reach legendary status in the video game industry. The game was hugely influential in the adventure game genre, and eventually created a franchise of five games. If you ever need an introduction to old games or adventure games in general, you must give The Secret of Monkey Island a try, I promise you won’t be disappointed.