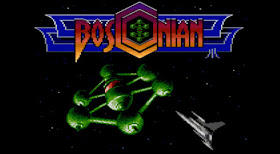 It's the Atari's turn for a great port, as we've just learnt that the 1980's Namco game of 'Bosconian', has recently appeared on the Atari 5200, which was previously ported over to the Atari 8bit by the same coder Shanti77. Currently available as 'Bosconian Ultimate' with all the latest patches included. This game is a multi-directional scrolling shooter arcade game with similarities to Star Control, it requires you as the space ship pilot to score as many points as possible by destroying enemy missiles and bases while also avoiding asteroids, mines and other such ship destroying objects.

This rather unheard of game Bosconian was already ported over to the Sharp X68000, MSX and C64, with a sequel Bosconian 87 released in 1987 for the Amstrad CPC, C64 and ZX Spectrum. It was also a rather unique shooter in the fact it featured digitised speech such as " Blast off " and " Alarm! Alarm ", which after a while could get a little bit annoying. As for this improved version, it features a title screen and hiscore the same as in the 128k version, "Blast Off" Sample at the beginning of the game, nicer ghosts, 5 samples added AND other miner fixes.