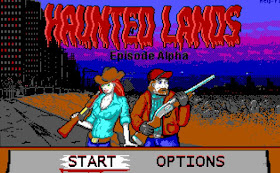 It's a Monday and it's a new week for fresh games to play! The first one up that comes highly recommended, is Alevgor's action platformer 'Haunted Lands - Episode Alpha'. This game which can be played either online or downloaded, is a high grade PC homage to classic DOS games such as Commander Keen, Dangerous Dave and Bio Menace with deadly demons, ghouls and a powerful shotgun!


Haunted Lands is a homage to classic games in which you must blast your way through the hordes of ghouls and demons, leaving behind nothing only their rotting corpses. The first episode features, 2 difficulty modes, 2 playable characters, 6 fast levels swarming with dangerous enemies, plenty of blasting action, lots of gore, a kick ass soundtrack by a team of people listed in the game, and enjoyable gameplay that will keep you coming back for more.