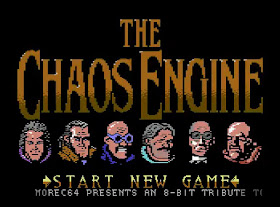 The original Chaos Engine was an incredible game released in 1993, and developed by the very famous Bitmap Brothers. It was a well known title that at its core, was for the Amiga in which one or two players battled in a top down shooter genre against the evil creations of the titular Chaos Engine. With four landscapes to traverse and weapons to use it was an extremely popular game on any system. Well if you remember this incredible game, you might be interested to know, it may be coming to the C64 in the form of 'The Chaos Engine 64'.


Altough it's still very early days and we are unsure if the tease is going to be turned into a full game at any point soon. The developer has noted on his twitter page, that he is working on a one stage demo of the game, and hopes to have it released to the public when it's finished. So check out the twitter feed above, and marvel at what looks like an impressive start to an early 8-bit tribute!