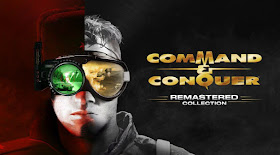 We've certainly had our fair share of Command and Conquer news on this site, especially featuring top quality standalones such as Twisted Insurrection and The Dawn of the Tiberium Age. But this latest news goes even further! As just moments ago we found out that EA with partnership with Petroglyh, is not only releasing remasters of both Command & Conquer: Tiberian Dawn and Command & Conquer Red Alert, with Covert Ops, Counterstrike, and Aftermath bundled into one remastered collection, but a new official trailer and further details has just been announced!

But if that wasn't enough to get your strategy skills tingling, they have also mentioned in partnership with Lemon Sky Studios, you'll be playing these fantastic games in glorious 4K, without any microtransactions, rebuilt graphics and textures, legacy and modernized graphics, a seven hour soundtrack remastered by Frank Klepacki, a revamped UI with updated controls, and finally a new map editor with new multiplayer modes supporting a great online experience! So when is it all coming out? June 5th on both Steam and Origin!