Little Princess - Family friendly game from 2014 for the Amiga 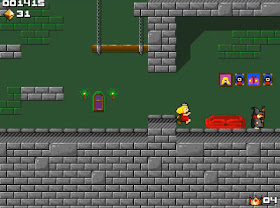 Night Owl Design has made some very decent games for the Amiga over the years, especially with Solid Gold, Trap Runner and the more recent Celtic Heart under their belt. But today's news however isn't a new announcent as such, as two games we never featured but still worth mentioning today on Indie Retro News, are the family friendly games for the Commodore Amiga, Little Princess and Little Princess 2.

It is in light of the old game Solid Gold that these two games were made, each one created for Gerrit's little daughter after she felt Solid Gold although enjoyable, was far to hard and wanting her dad to make something easier, unpolished with graphics of her own at the age of just 8 years old. So yes if you are looking for a couple of games that can be played by anyone of any age, with just enough levels and gameplay, then it might be worth your time playing these games released back in 2014/2015!