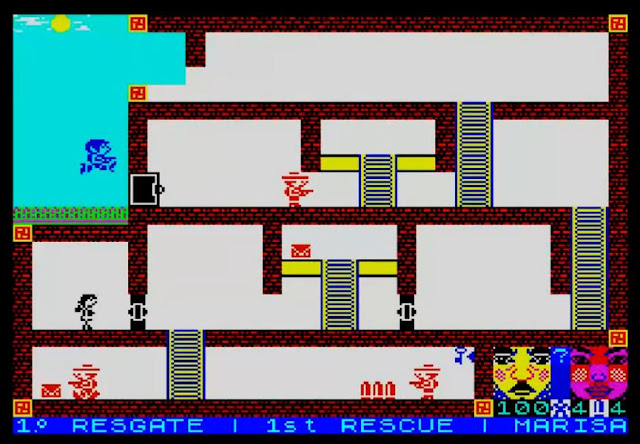 We turn our attention to the ZX Spectrum now for some retro gaming goodness, as if you love playing Arcade games whereby rescuing hostages is the aim of the game, then you might like playing ' Agent Blue' developed by José Silva, Jaime Grilo and IK (Artur); a typical arcade game for the Spectrum 48K (no music) / 128K (with AY music) made using AGDX (a modified version of Arcade Game Designer 4.7) and AGDMusicizer II.

Spread throughout multiple parts, corresponding to daytime (1 to 10) and nighttime (11 to 20) rescue missions with each part having 10 playable levels. You play as Agent Blue and must rescue the respective hostage from the clutches of his abductors while avoiding being shot by deadly enemies that are spread throughout the level. Collect the keys to open the door to rescue the hostage, and collect 3 scattered envelopes that contain the code for the next mission!