OutRun has a lot to answer for. It literally set the bar for 2D pseudo-3D driving games when it came out and is still the benchmark to follow when making a pseudo-3D racer. With it's chunky roadside super scalar engine sprites it set the tone for driving games right up to when actual 3D engines produced better results. So it's no surprise that remakes and homages are ever popular (to the point where we have pseudo-pseudo-3D driving games rendered in full 3D to look like the pseudo 3D. Games Like Horizon Chase.) So now we have one on the diminutive fantasy console Pico-8, and for such a limited platform, Desert Drift is breathtaking in its reproduction...

This isn't the first pseudo-3D racer on P8, Pico-racer has that honour, but Desert Drift by @johanpietz is packed with roadside detail, long sweeping undulating bends and a great feel for the original racers with a nice control feel. And while the fantasy console's limitations mean the originals style will never fully fit (16 colour pallette, 128x128 resolution, artificial limit on code size and performance...) it doesn't stop people from having a go! 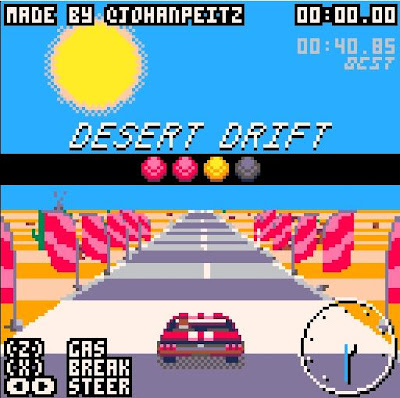 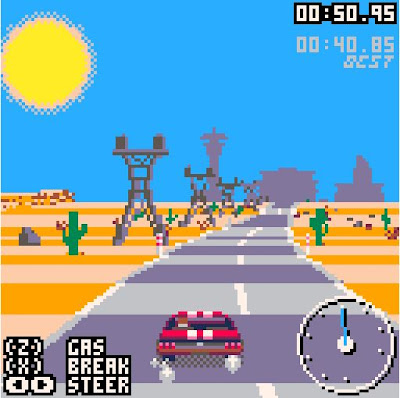 However, this is of course Pico-8 which is by nature limited in capability so there are tradeoffs... Firstly, it's short. My best time so far is around 40s for the course and I don't see being me able to improve significantly on that by more than a few seconds. Second, there's no other cars, so it's really a time trial than a racer. And perhaps most significantly there's only one track so once you can't improve any on that, then you're done. 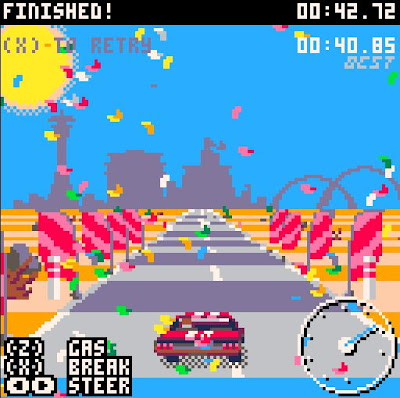 Then If I'm feeling slightly picky, the slowing effect of not accelerating is harsh. Probably feels how braking would, to the point you only need a release for a split second to slow down enough for any of the bends.

But none of this matters... It's Pico-8 so that means, if you want, you can edit the cartridge's code and change it if it bothers you. So it's a great time trial/tech demo showing how good pico-8 can be, but sadly not quite a full game. But that's OK as it's such a beauty of thing in its own right.

Desert Drift can be downloaded for Pico-8 or played in browser here: https://www.lexaloffle.com/bbs/?pid=55232&tid=31685