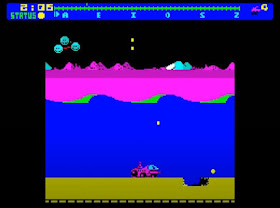 In 1982-1987, Irem with licensing by Williams released the fantastically enjoyable game of' ' Moon Patrol ' for the Arcade gaming community. A side-scrolling shooter that is widely credited for the introduction of parallax scrolling in side-scrolling video games, as you drove a buggy across a landscape, jumping over ditches and rocks while also shooting at enemies both above and in front made this such a great game to play.


It was so popular in fact that many remember it on a multitude of home systems such as the Atari 800, 2600, Gameboy, Gameboy Advance, Dreamcast, Intellivision and an enhanced edition for the Atari XL/XE released last year called Moon Patrol Redux. So why are we mentioning this game you might ask? Well take a look at this excellent unofficial version of Moon Patrol on the ZX Spectrum; a newly titled Moon Ranger by Gabriele Amore, which in itself is a far better version of Moon Patrol sporting a better soundtrack, smoother framerates and generally more pleasing on the eye.