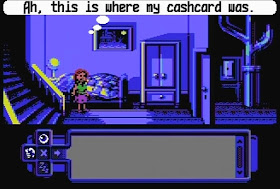 Right from the word go Indie Retro News was one of the first sites to give you the heads up for Oliver Lindau , Martin Wendt and Kamil Wolnikowski's fantastic looking Adventure ' Caren and the Tangled Tentacles ' for the C64. It was a previous winner of the F64GC 2015: Adventure competition and released as a downloadable 1.1 version much to the appreciation and excitement of the retrogaming community. Yet this week the game is looking so much better as a new teaser video has been released of Caren and the Tangled Tentacles V1.3, the Commodore 64 - A Visual Commpendium 2nd edition kickstarter EasyFlash-cartridge version


So how does this Kickstarter version differ from the freely downloadable one released a little while back? Well it is a limited release for the successful Kickstarter "Commodore 64: a visual Commpendium (Second edition)" , a boxed cartridge and it contains extended gameplay, exclusive content and super fast loading times thanks to it being a cartridge! So if you think the original release was a damn fine adventure, you've seen nothing yet!

The v1.3 cartridges are limited to 100 boxes as exclusive offer to a kickstarter and there is none left and the campaign is closed too.