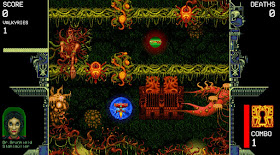 On the topic of scrolling shoot em ups such as 1942 and the recently released 194-8 on the Pico-8, it might be worth your time taking a look at this rather cool looking shoot em up for the PC; ' 1917 The Alien Invasion ' developed by Andrade-Games. Available for just 4.99, 1917 is a memorisation shooter combined with the fast and frantic action of bullet hell shoot em ups, while also having a unique graphical design, an interesting UI and yes, even bloodshed!


You are in the role of Dr. Brunhield Stahlmüller, an acomplished weapon scientist who upgrades a WW1 triplane with superior alien technology to attack the invaders. You will avenge mankind and take the battle into the darkness of space until you reach an ancient alien world. The game features extravagant pixel art inspired by classic arcade games, accessible gameplay with a fair difficulty curve, intense action, 5 stages including bosses, gore, psychedelic music, full Xbox controller support and even a digital PDF art book.

Worth a fiver? It certainly seems that way!