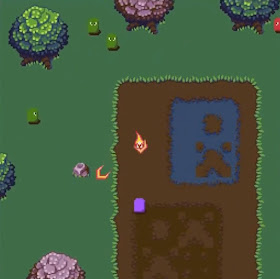 You may remember our exclusive heads up for the unofficial Amiga platformer overhaul of ' The Great Giana Sisters ', which was known as ' Giana Sisters Special Edition '. It was a remastered/overhauled release by a new label called Reimagine Games as a teaser of what was to come focusing on non commercial ports, hacks and remakes. But under a new company name which is focusing on the commercial side is Pixelglass, who today have announced as their first commercial Amiga game 'AlarCity'. A fast paced, top down, arcade shoot'em'up action game!


As you can see by the rather smooth shoot em up video above, you look to take the roll of an orange flame with the power to blast away many different enemies, who will come at you as swarms of coloured blobs(?). It will be a fast game that will push you to the edge in non stop action as you try not to be overcome. A decent looking game indeed, that according to the developers is targeting primarily unexpanded AGA Amigas (A1200, CD32) while a version for PC and  MAC is also planned as well.