Drunken Chopsticks C64 - Stop the flies from getting into Mr Miyagi's broth! 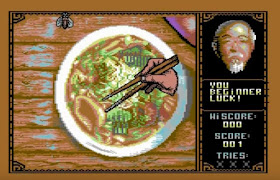 I always liked the film Karate Kid. Released in 1984 it told the story of Daniel LaRusso, a high school student who moves from New Jersey to California and is subsequently targeted by a group of bullies that all attend the same Karate school. He is befriended by Mr Miyagi, his apartment block’s handyman, who teaches him another form of Karate to defend himself. The instruction sees him setting Daniel a series of seemingly menial, boring, mind numbing tasks, such as painting his fence and waxing his car.


And it is one of those tasks you'll be performing in this new C64 game released by Atlantis for the BCC Party #14 called 'Drunken Chopsticks'. A rather enjoyable game in which you need to use your chopsticks to stop flies from getting into Mr Miyagi's broth. Failure to do this three times and you'll be quicky forced out into the garden to perform another mind numbing task of painting the fence (Not in this game though).