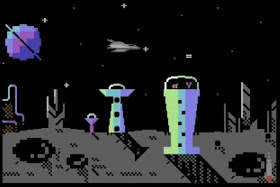 Usually when it comes to scene demo's, they are released by groups, containing awesome tunes, scrolling pieces of talented artwork, and other such greatness hoping to win that top spot in a competition. I mean who hasn't heard of Fairlight, Noice and Offence before? Well anyway, what if rather than watching a scene demo you could actually play one? Welcome to Vega; a damn fine demo originally released by Delysid in 2017 that can now be played as a C64 shoot em up inspiration by Atwoods Studios and trained by Excess!


Yes indeed in this game which looks to be a conversion of the demo by Delysid, you must fly through impressive pseudo PETSCII artwork, while destroying multiple waves of enemies. Although the gameplay is very simplistic and probably wouldn't win any Arcade awards, atleast it's nice to look at and shows what can be done with demos such as the one used above.