Upcoming Streets of Rage 4 gets a new trailer! ( Switch/PS4/Xbox One/PC ) 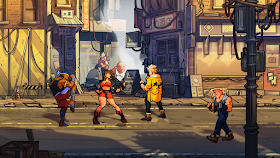 The news is spreading far and wide and that has come as no surprise to us, as just moments ago through our twitter page, we've found out that the publisher Dotemu and developers Lizardcube and Guard Crush Games, have announced a new trailer for their upcoming game Streets of Rage 4. An all-new continuation of SEGA’s iconic arcade brawler series known for its kick ass tunes, bare knucke fights and wonderful 16bit graphics styling with OST tracks from legends such as Yūzō Koshiro, Motohiro Kawashima, Yoko Shimomura, Hideki Naganuma and Keiji Yamagishi!

Featuring hand-drawn visuals from the team behind 2017’s gorgeous Wonder Boy: The Dragon’s Trap remake, Streets of Rage 4 builds upon the classic trilogy’s gameplay with new mechanics, a fresh story and a gauntlet of dangerous stages with a serious crime problem. Streets of Rage 4 recalls classic gameplay but it stands as an entirely original arcade-style romp thanks to the expertise of Guard Crush Games and Dotemu.