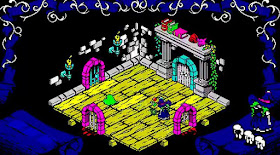 Remember when we gave you the heads up that Ultimate Play the Game's famous classic Atic Atac, was not only being remade for the PC but it was also being remade for the ZX Spectrum Next? Well there's great news for this rather dank and drizzly evening! As after checking through our Twitter page, we've come across a brand new update for the work in progress 'Atic Atac' game which they are calling Melkhior's Mansion!


As we said before.... Ultimate Play the Game released so many incredible titles in the 80's but this inspirational remake of Atic Atac, which is a remake of a game originally released in 83, does not only look like an impressive game, but most likely will be a hit download when it finally appears at some point in the near future. It features an isometric engine by Retrospec remake game developer Richard Jordan (Klass of 99/Zub), glorious remade graphics by Craig Stevenson with full backing by Rare studio, who still owns the right to the franchise, and full porting to the ZX Spectrum NEXT by Kev Brady!