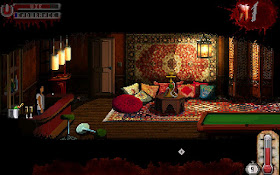 Gamers who prefer a more horror oriented Adventure will be pleased with this news, as we've recently found out the Adventure horror game of ' JORRY ', has been released on Steam for the PC by Korozif. This game according to the creator, is a game filled with horror that is inspired by the classics of the 90's including not just action, but survival game play that is intended for adult audiences. So yes you can probably die being eaten alive!


Furthermore if that wasn't enough to get those horror goosebumps going, the game features lots of riddles and puzzles, a fighting system that is fully playable with a mouse, skill based improvement system, 2D graphics in 320x200 16bits, multiple endings, and finally all of this set with an atmospheric overtone and original creepy music!