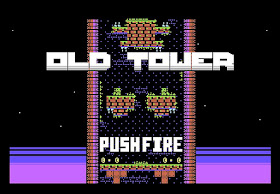 If you've been following RetroSouls through the last couple of years, you would've known they have released games such as GLUF, Old Tower, Twinlight, Alter Ego, and even Tourmaline for the ZX Spectrum. Well today as thanks to a heads up via their Twitter page and from our good friend Per Ola, they have announced a new(ish) game for the C64 called ' Old Tower '; a game which was previously released on the ZX Spectrum that has since been ported over to the C64.

Featuring a wicked soundtrack, an awesome loading screen and superb graphics by a worthy team of RetroSouls. You play as a little explorer and must traverse ever higher in a tower filled with deadly traps and bats. Beware though as this wont be an easy task, as the only thing to help you is your own quick thinking and the ultimate of tower climbing skills... So good luck!