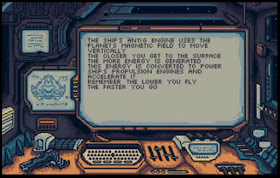 Once again Saberman has contacted us, as he has told us Retro Bones Games have released some more teaser footage of their upcoming game' Verge World - Icarus Rising '; a rather unusual looking game that's coming to the Amiga, in which you play as Nix, a smuggler on a dry desert planet. As noted from our previous write up, Verge World Icarus Rising will not only have its own story, but will be played in a third person perspective with the possibility of using open Fractal or Voxels.


In terms of the requirements of the game as it is still early days. The developer(s) behind the game have said it should work on any Amiga and is planned to full use of better CPU and hardware.... As for the footage above, it's the very first time we've seen the story, heard the music, and the graphics between each flying stage, but do be aware however its still at a very early stage of development.