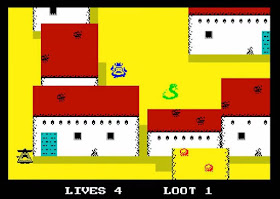 We haven't featured a new ZX Spectrum game for nearly a month now, so to change all that here's a new speccy game you might enjoy playing called ' Bandito ' developed by Payndz. Although a short game and can probably be completed in well under an hour, you play as a Bandit and must traverse different scenes collecting loot, while also blasting away deadly enemies such as Snakes, Indians and Scorpions.


According to Planet Sinclair who mentioned the game, Bandito was developed outside the BASIC 2020 competition and was created by Payndz who previously created maze and adventure based games. This game is yet another adventure, but instead is set in the Wild West during 1848, with the task of collecting 20 bags of money across the 64 screens.