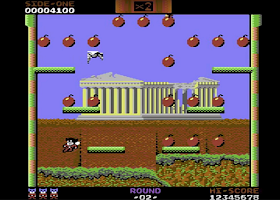 Remember when we gave you the first hand heads up over an overhauled work in progress announcement of Bomb Jack for the C64? Well today we've just been given a rather nice looking update to Retrofan's ' Bomb Jack DX '; which has received more than just a few improvements. Originally an arcade platformer released in 1984, with many different ports such as the Amstrad and C64, Bomb Jack DX looks to be a vast improvement over the original, with not just better graphical detail, but smoother gameplay and optimized character sprites. To coincide with this news, the developer has also released a new gameplay video!

As I said before I personally can't wait to play once again as Jack the super hero, who can leap and glide, while disarming the 24 bombs that have been planted at famous tourist sites. It was an incredible game on the Amstrad so lets hope this C64 remaster lives up to the hype!