Way back in 1985 Capcom released the start of one of the greatest side scrolling platform game series we have ever known. It featured a knight, creepy enemies, lots of graves and was extremely difficult to the point of frustration. The game I am talking about is of course ' Ghost 'N Goblins ', the first game in the Ghosts 'n Goblins franchise which appeared on many different systems such as the Amstrad, C64 and ZX Spectrum. And it is that game from the Amstrad CPC version which is getting an overhaul called ' Ghouls 'n Goblins ' and is being developed for the GX4000!


Currently at a work in progress state by Nemo Kantio with only three playable levels so far, from the Jan version. Ghouls 'n Goblins features redesigned enemies, character detail change, an overhaul of the landscape graphics and the biggest change which everyone will notice is smooth scrolling throughout each level. Which really uses the capabilities of the GX4000 console!

But as it is still a work in progress tease, there is currently no music being played, no sound effects, lots of levels missing and other such features we have failed to notice in the first video. As of yet we don't have a release date, but I don't see the full version coming out any time soon.

UPDATE : As of today, an Alpha demo has been released for you to try, but be warned it's only a first level alpha! But from a quick play through, you can already tell this overhaul is going to be impressive when it's done. The graphics look far far better than the CPC version, the game play is spot on and that great original soundtrack plays throughout. Well worth a try via the Amstrad emulator WinAPE! 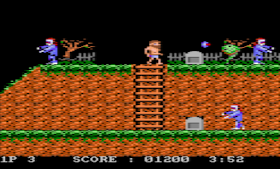