Last-Out - PC remake of the Amiga/Atari ST Shoot em up Z-Out, gets a beta release 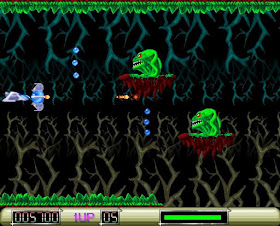 Something special has just appeared in our inbox, it's the latest beta release of Christophe Simon's PC remake of the Amiga/Atari ST Shoot em up, Z-Out. Named as Last-Out and developed in Game Maker, this game aims to be as close possible to the 1990's sequel but completely overhauling the graphics with a remixed soundtrack by Marco Marold (SunSpire). Although the remake was first announced way back in 2009 with all three levels complete, 0.5.4 beta released this week has been updated and includes a partially playable level 5.


In the above video which is from 2010, SunSpire did mention in the description that the game already had a lot of bug fixing, improved in game graphics and new features. However there had been a long period of nothingness and people did wonder if the project was dead. But in all honesty, I'm glad the project is back on track as everything about the work in progress remake is looking mighty fine, oh and it sounds great too!