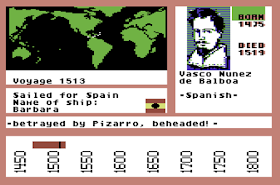 Inspired by an Ebay find, MadMax of Mad Hacker's Incorporated teamed up with Hokuto Force for a new release of The Sea Voyagers (1984). This release adds the game's manual, and comes with a photo of the keyboard overlay, which you'll need to play the game. This is a mainly text based interactive history lesson, don't expect any arcade thrills or pirating glory. But if you've got any interest in knowing a little bit more about early European explorers, or would like to test your knowledge, or have kids who like history, then this is definitely worth checking out. 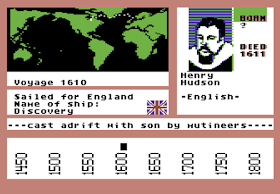 There are 4 game modes and 30 featured explorers, choosing the first game mode, will let you choose an explorer and read some key facts about them, and show the routes they took on the map. This knowledge you can use to try to get points in the other game modes. For example a game loosely based on Poker, where you try to pair explorers by the countries they sailed for, which you can play against another player, or the computer. Other game modes have you try to match the facts with the relevant explorer, or try to guess the explorer from the least amount of clues possible. For example: Who destroyed the Aztec capital, founded Mexico City, and took the gold and silver back to Spain?. It was fun to learn more about Christopher Columbus, often credited as being the first European explorer to discover North America, he believed all his life that he'd discovered the Orient. And settlements had been founded much earlier by viking raiders and explorers. James Cook was killed by native Hawaiians in a scuffle over a stolen board, after they first believed him to be a god. It seems like life expectancy of these early explorers tended to be quite short. 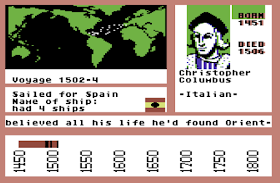 While the limited number of explorers, and few facts required to know about each, might not keep you all that hooked to the game. You might find the more detailed history provided by the docs more interesting. The docs are only bundled with this release of the game, or in the box if you have a good copy. The actual game is unchanged from the 1986 crack from The Newcomers. But you'll probably get more out of the game with the extras included here.