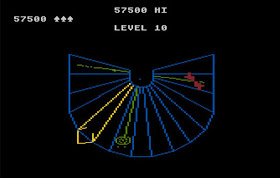 Possibly the last news of the day as I seriously need a break, is the latest news from the Atari 8-bit community, is Dave Theurers tube based shooter ' Tempest ' which is coming to the Atari 8-bit as Tempest Elite. First released in 1981 on the Arcades, Tempest was released by Atari Inc and puts you in control of a claw like spaceship blasting enemies on a three-dimensional surface, divided into multiple segments or lanes. A great game for its time that's still worth playing today, is going to be released on the Atari 8-bit as an Elite edition with many more levels and changes including up to 24 lanes, that can be opened or closed with many different shapes.


You'll be surprised to know Tempest Elite has been in development on and off for almost 5 years by peteym5 via the atariage community. It will require a 64K Atari with a cartridge port and runs on a standard Atari OR an Atari with VideoBoardXE. Also as an added extra, this game has the ability to detect which chipset is present inside the computer. The Music sound track is Stereo Pokey, but will still play on mono Atari.