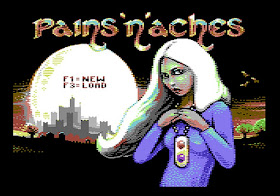 In 2009 Wide Pixel Games, with publishing rights by Psytronik Software, released the fantastic action adventure platformer game, Knight 'n' Grail, which was rather like Metroid and Castlevania. It featured over 200 screens, upgrades, varied monsters and much more that made it a highly recommended game and one of the best on the C64. So as a glorious announcement and a heads up by Oliver Lindau. Mikael Tillander, Håkon Repstad & Hans Axelsson, the team who brought you the original stunning Knight 'n' Grail game are working on the sequel as Pains 'n' Aches, which has since received a new gameplay footage video!


According to the write up the game continues the story from the original Knight 'n' Grail, but with all new locations to explore, puzzles to solve, big boss battles and even clever story twists mixed up with high quality gameplay. But if that wasn't enough to whet your appetite, you'll also be playing through a massive map, powering up your character, and listening to an atmospheric location soundtrack and taking in the high amount of detail and nods to the original Knight 'n' Grail. As the team says "Prepare yourself for a massive arcade adventure"